Serena Williams has returned — and in spectacular fashion.

For the first time since giving birth to her daughter, the 36-year-old entered Grand Slam play at the 2018 French Open in Paris, dominating Kristyna Pliskova of the Czech Republic in straight sets.

But it was the message behind her uniform that got many fans talking.

All-black, with an eye-catching neon stripe wrapped around the middle, the uniform’s symbolism resonated far outside the stadium.

Wakanda, of course, is the fictional, mystical African nation home to Marvel’s Black Panther. The superhero film tore up the box office earlier this year, earned rave reviews from critics, and inspired a wave of black pride fashion amongst the film’s stars and moviegoers.

Her “Black Panther” get-up quickly sent Twitter abuzz with the term “catsuit,” as Sports Illustrated’s Jon Wertheim pointed out in an interview with the athlete shortly after her victory. 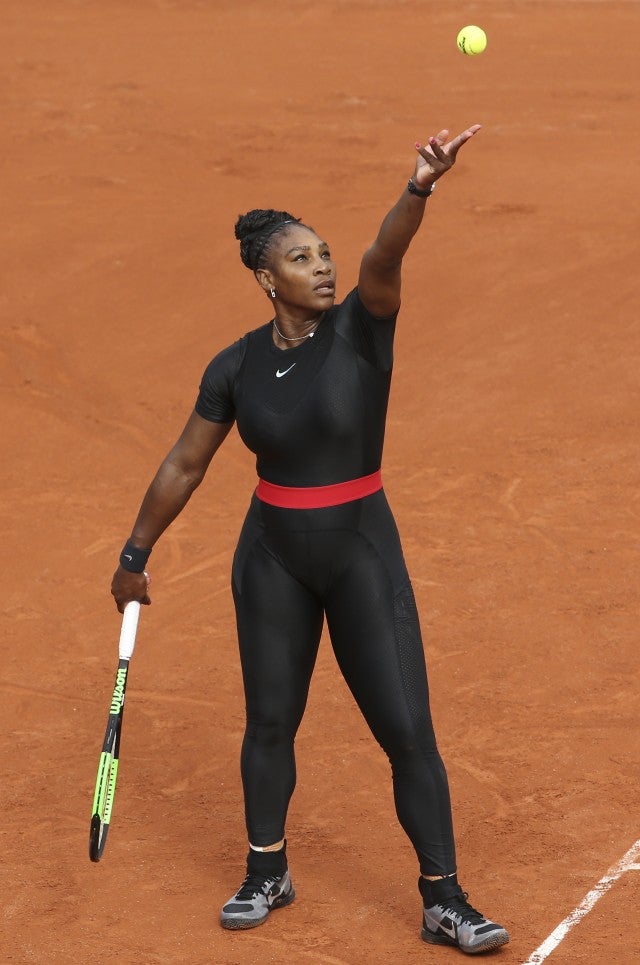 “You can’t beat a catsuit, right?” Williams said with a smile.

“[This uniform represents] all the moms out there that had a tough pregnancy and had to come back and try to be fierce in the middle of everything.”

The uniform’s design had a practical use for this fierce new mom too: Its extra-snug fit helped prevent blood clots, according to The Guardian. And for Williams, that feature is critical.

The tennis champ has been candid about the health challenges she’s endured since giving birth.

Her daughter was born via emergency C-section after the baby’s heart rate dropped dramatically during contractions, the tennis star wrote for CNN in February. In the following days, a number of health complications — including a pulmonary embolism in Williams’ lungs, a large swelling of clotted blood in her abdomen, and a tear in her C-section wound due to intense coughing — made her road to recovery anything but smooth.

“I almost died after giving birth to my daughter, Olympia,” Williams wrote, noting how lucky she was to have had quality health care — unlike many new parents in the U.S. and around the world. “I consider myself fortunate.”

Williams’ story and circumstances are uniquely hers, of course.

Not every new parent is a wealthy, world-renowned athlete with the type of resources and luxuries at their disposal to be winning Grand Slam matches mere months after giving birth. But Williams — in her marvelous catsuit — still has a message for new parents that’s good to keep in mind: You got this.

“For all the moms out there who had a tough recovery from pregnancy — here you go,” the star wrote on Twitter, sharing an image of her competing in Paris. “If I can do it, so can you. Love you all!!

Catsuit anyone? For all the moms out there who had a tough recovery from pregnancy—here you go. If I can do it, so can you. Love you all!! Editor
11
Did you know you can figure out how jeans fit — without even trying them on? Editor
33
Cardi B wore a giant fur coat in an attempt to keep warm in these frigid temperatures. Fashion Tips and Tricks That Will Change Your Life

Editor
44
When it comes to fashion tips, it sometimes seems that everyone have tried-and-true style advice